Compared to the original Race, the new Race Plus swaps the 115 Standard fuselage for the new 115 Plus fuselage.

This new fuselage shifts the front wing forwards and reduces tail wing angle to make it more aligned with the front wing, creating what we call a High Efficiency Foil Geometry (NZ Pat. App. No. 751177). With both wings flying through the water at more parallel angles, you release more speed, you get quicker acceleration and more control.

For racers looking for even more VMG upwind, a 115 Plus Plus fuselage is also available as an upgrade item. This places the front wing even further forward. 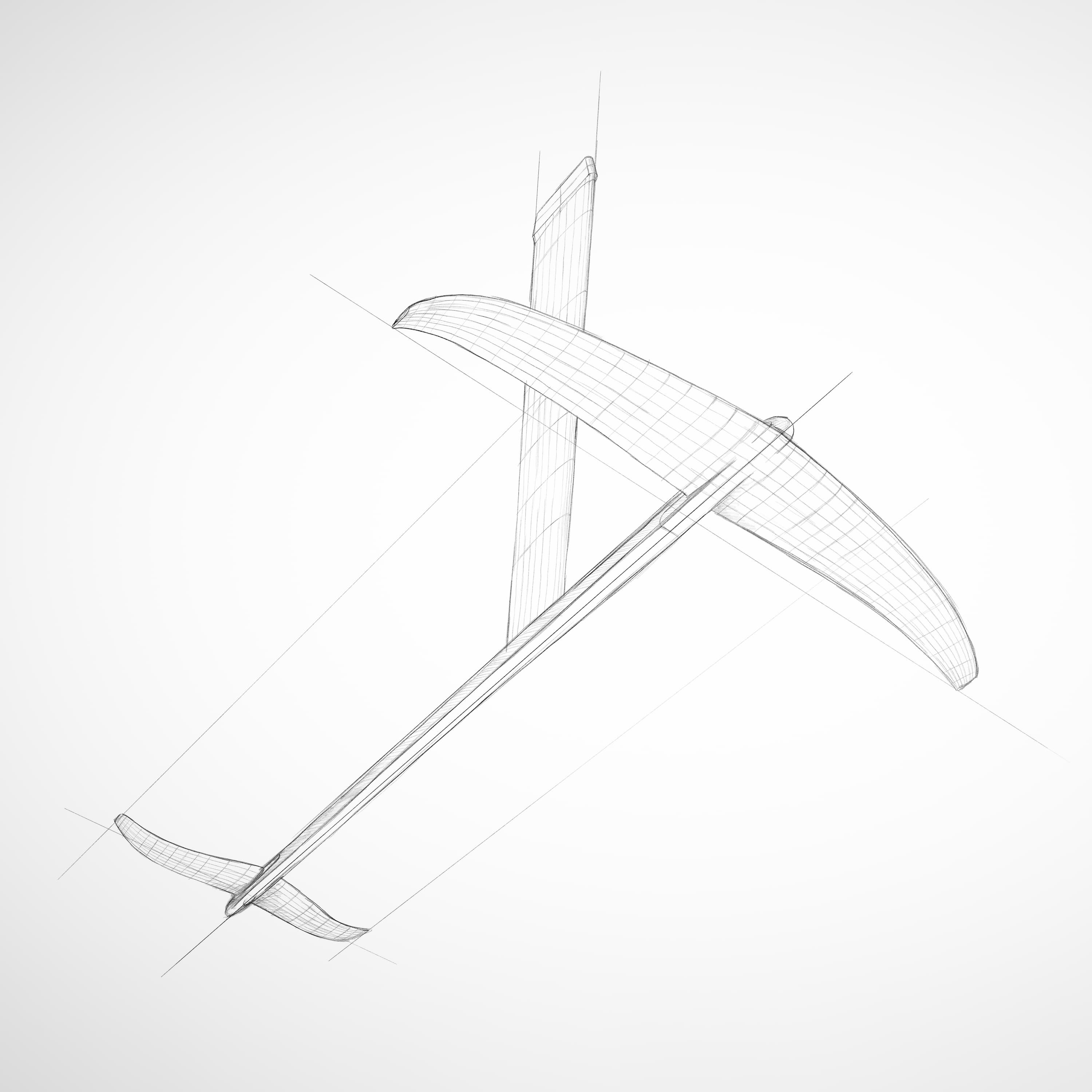 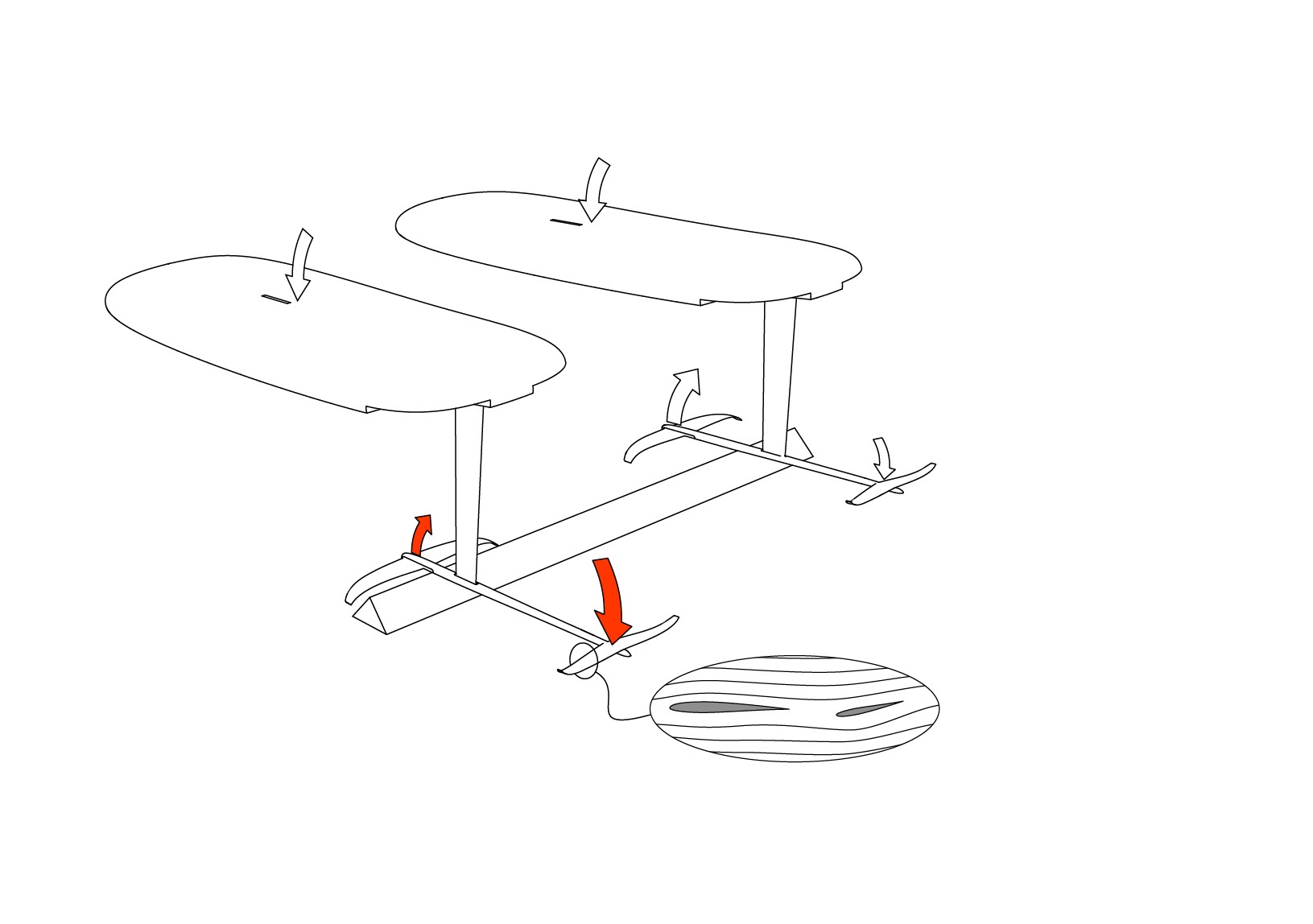 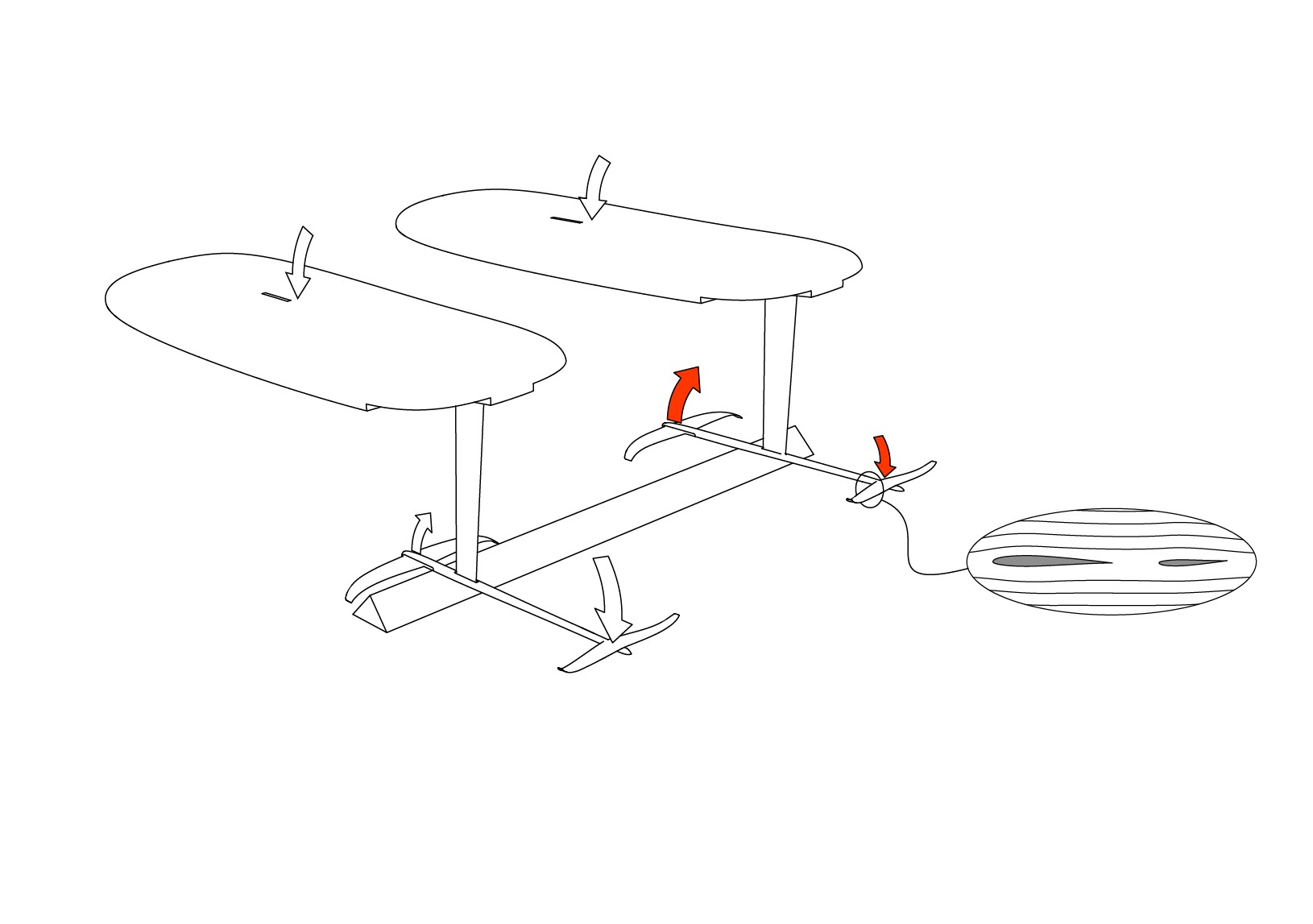 The 800 front wing is a high-aspect wing designed for all-round racing in medium to high wind conditions. The Tom Speer-designed profile is thin and relatively symmetrical, delivering speed with consistency. It has enough shape to provide constant lift and traction at various speeds. This is critical for negotiating low wind lulls, handling high wind gusts and making a wing you can trust all racing scenarios – overtaking, defending your line, recovering from small errors and foil jibing with confidence. 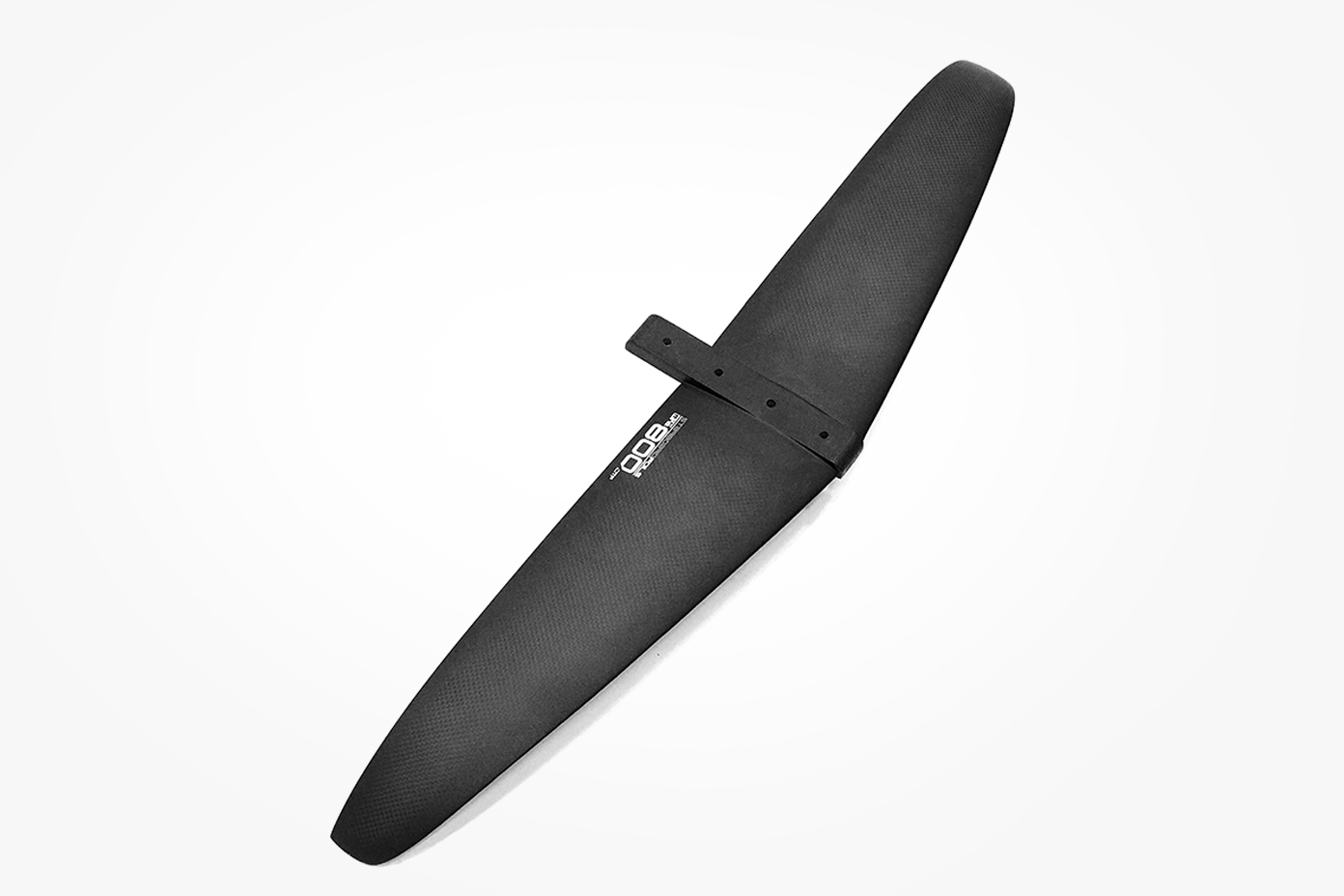 The 255 tail wing is the default tail wing for all foil racing. Thin, fast and super-efficient, it’s a staple for your racing foil quiver even as it evolves. The gentle moustache shape helps with yaw-stability. 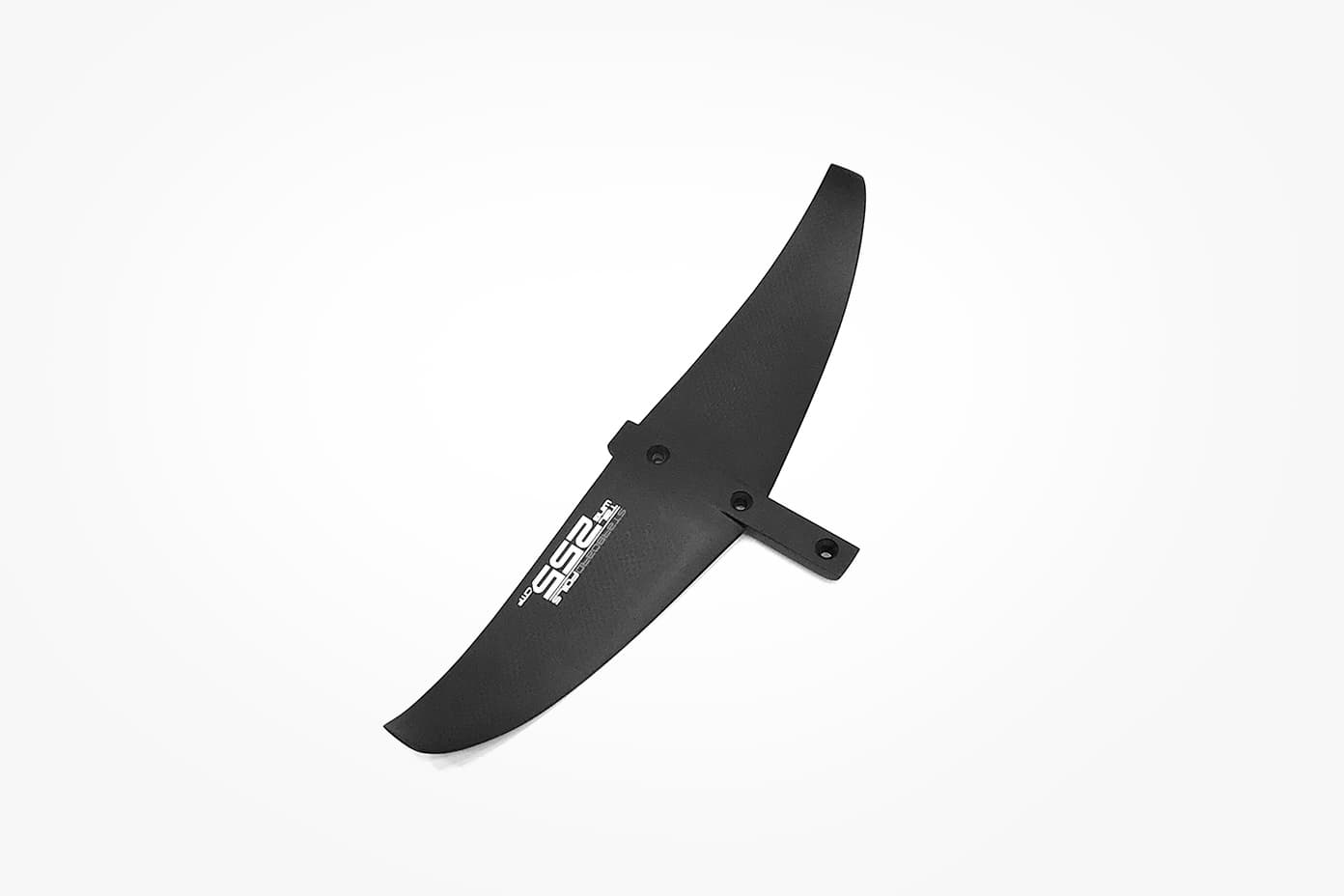 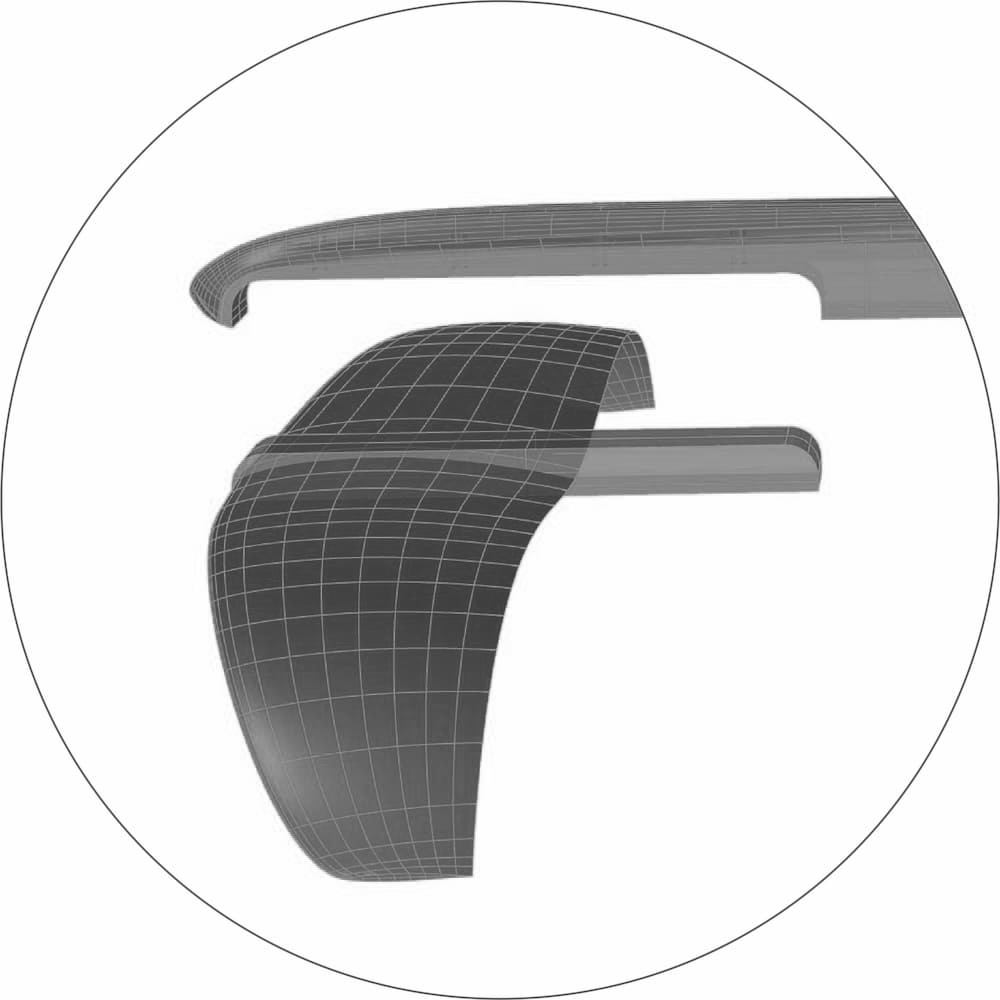 The Race Plus foil uses the saddle system for maximum connection stiffness. The front wing sits on a wide flat surface and locks in place via four countersunk M6 Torx bolts. The threads are anodized and reinforced with stainless steel helicoils for  strength and corrosion resistance. 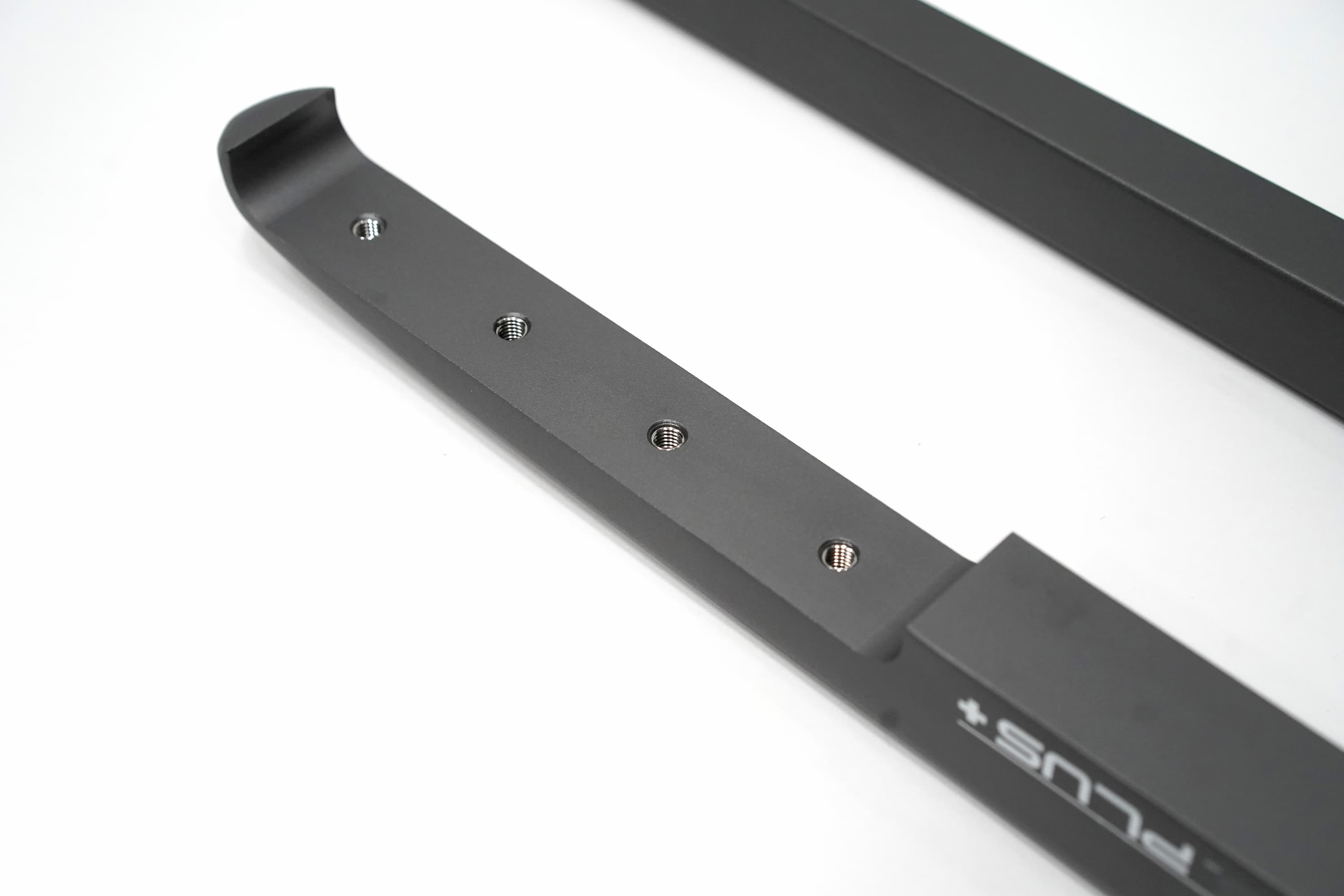 The 115 Plus fuselage is supplied with six angle spacers ranging from -2 degrees to +1 degree. By default, we recommend starting with the Tail Wing Angle Spacer of -1.5 degrees or -2 degrees for the Race Plus 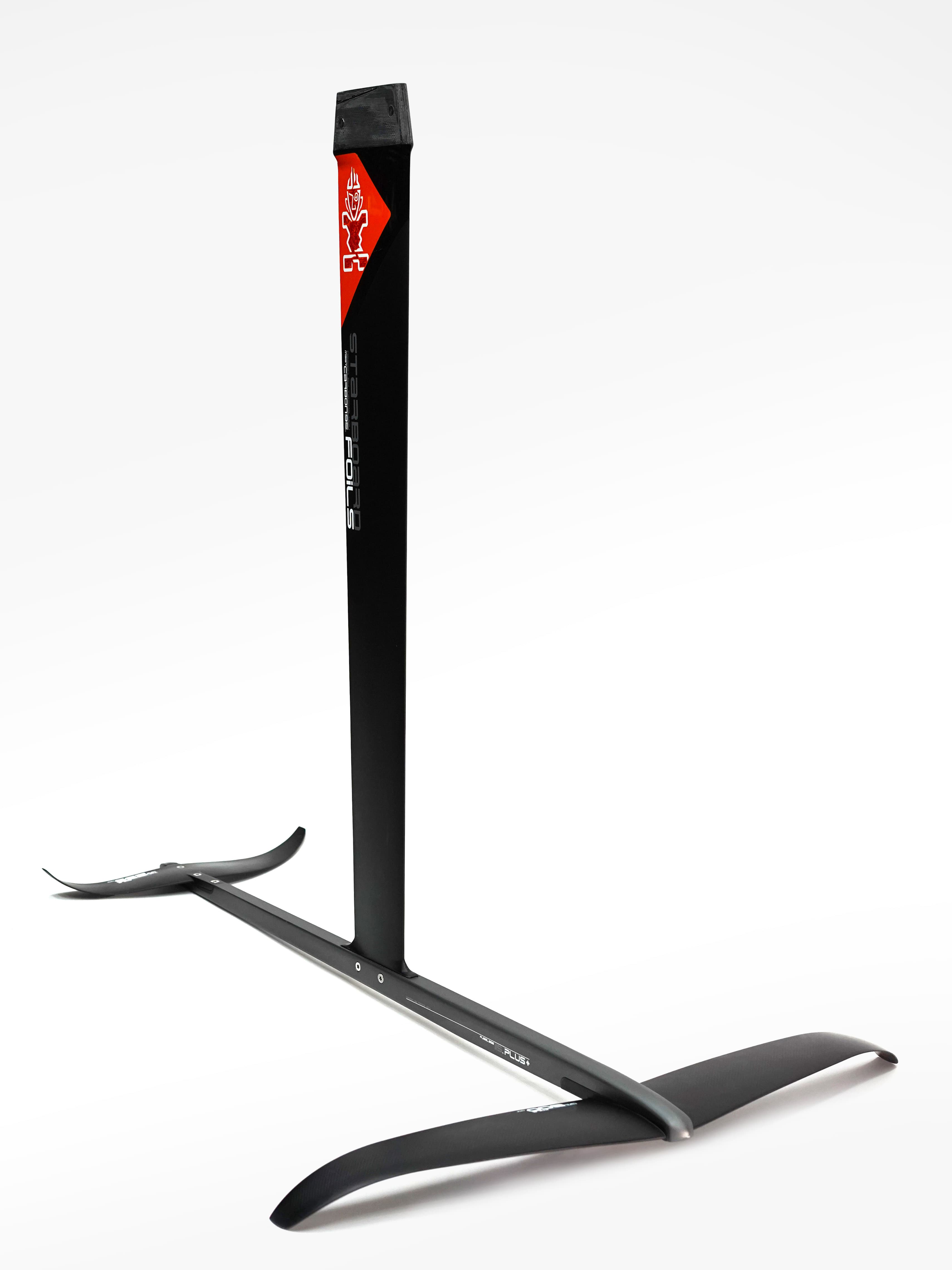 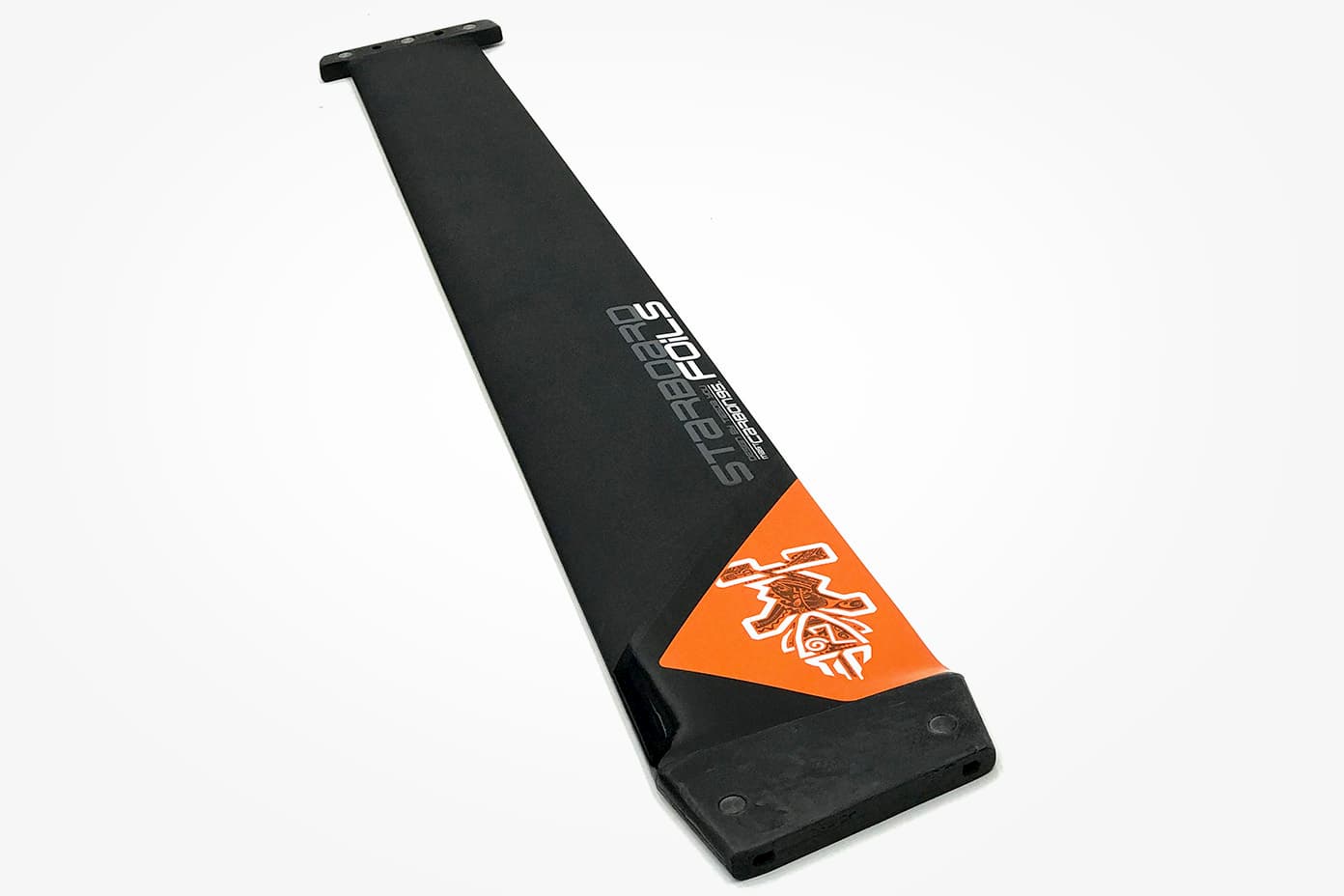 The Race Plus Carbon is supplied with the Carbon 95cm mast. It is built with forty layers of pre-preg high-modulus uni-axial and bi-axial Toray carbon, hydraulically pressed, heated and fused into one monolithic mast of incredible stiffness. The shape of the mast has also been optimized for flexural and torsional stiffness. Computer-simulated analysis shows the Starboard mast, by virtue of its shape alone, is already up to 52% stiffer than a traditional mast. 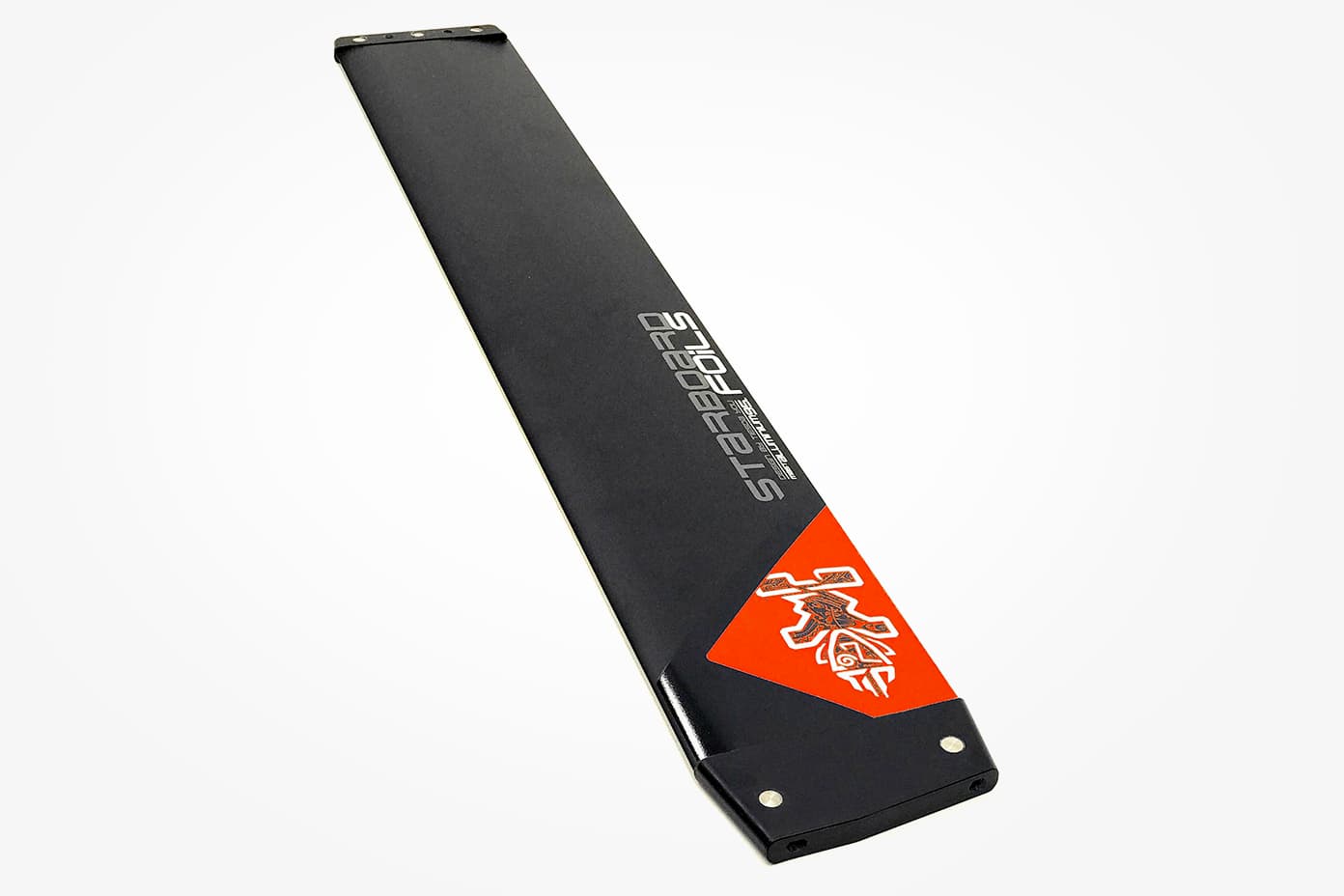 The Race Plus Aluminium is supplied with the Aluminium V5 95cm mast. It is built from an extrusion of 6061 aluminium, a grade of aluminium that we selected for its strength, weight and superior corrosion resistance. The V5 is extra-strong and extra stiff, making it suitable for windsurf foiling. Three oversized I beam stringers and five 12mm stainless steel bolts carry the vertical loads.  It is even stronger and stiffer than the Aluminium V7 masts used for wing and wave foils.

The Race Plus foil is designed for maximum power, maximum upwind performance and the earliest take-off.

What’s in the Race Foil Box? 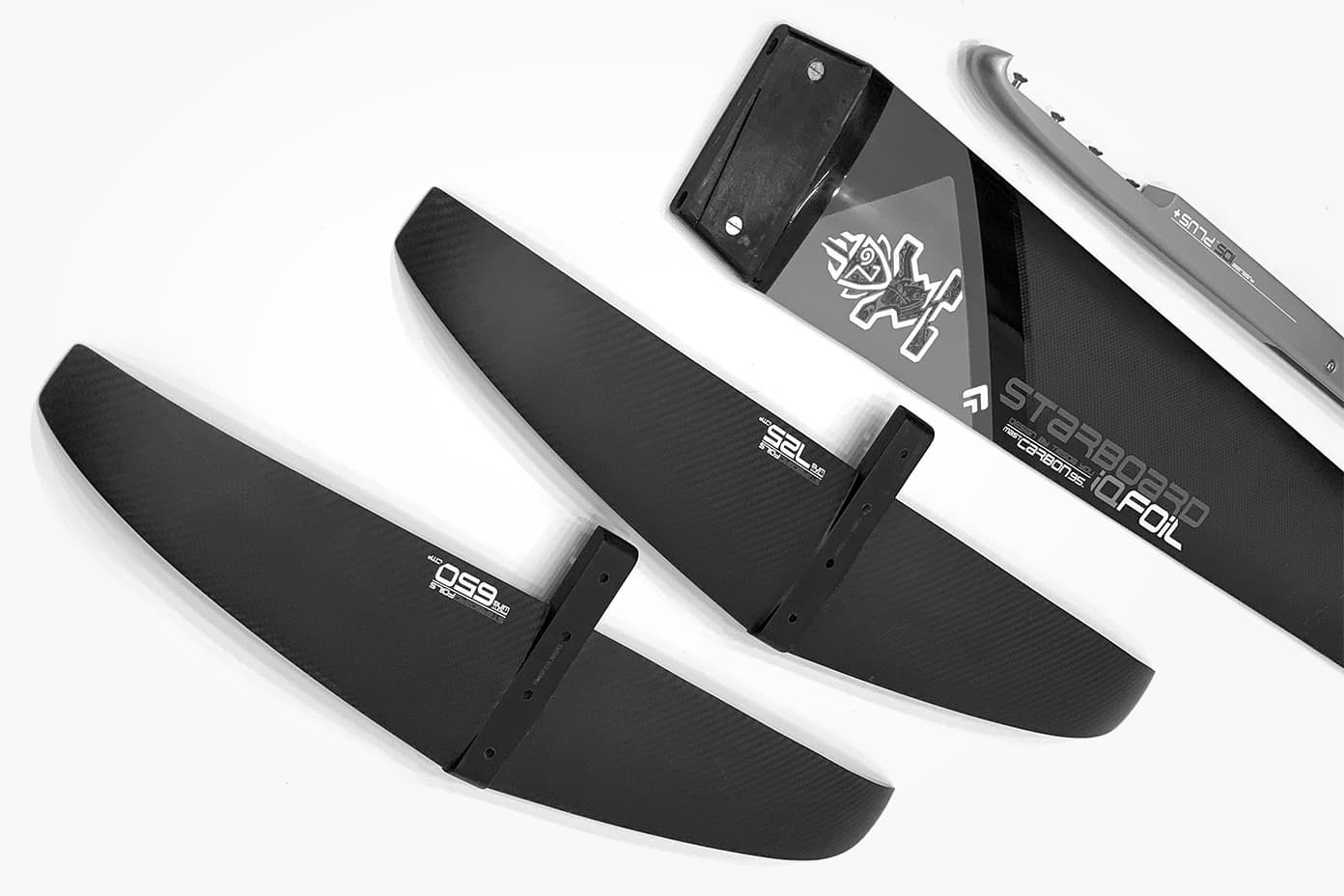 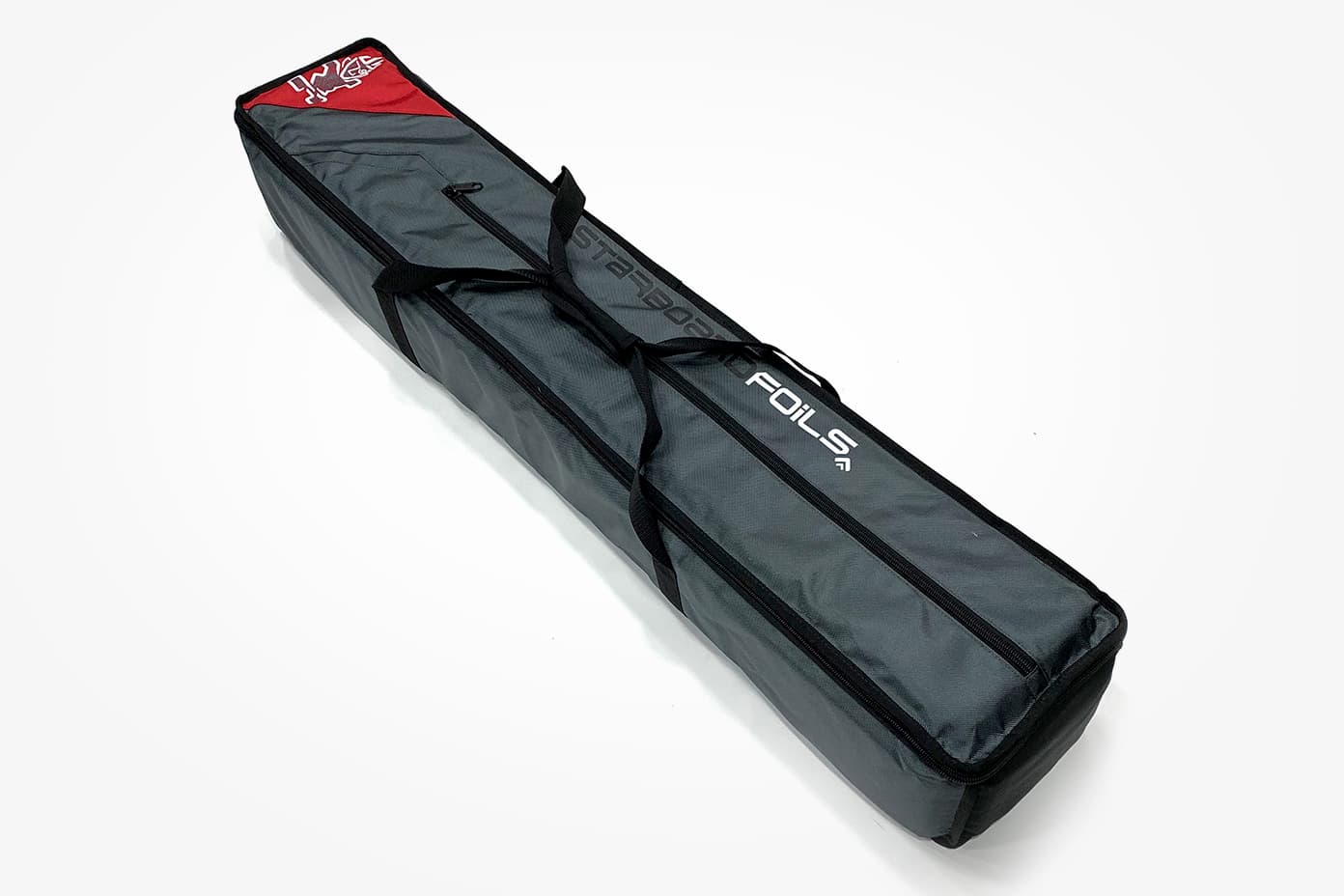 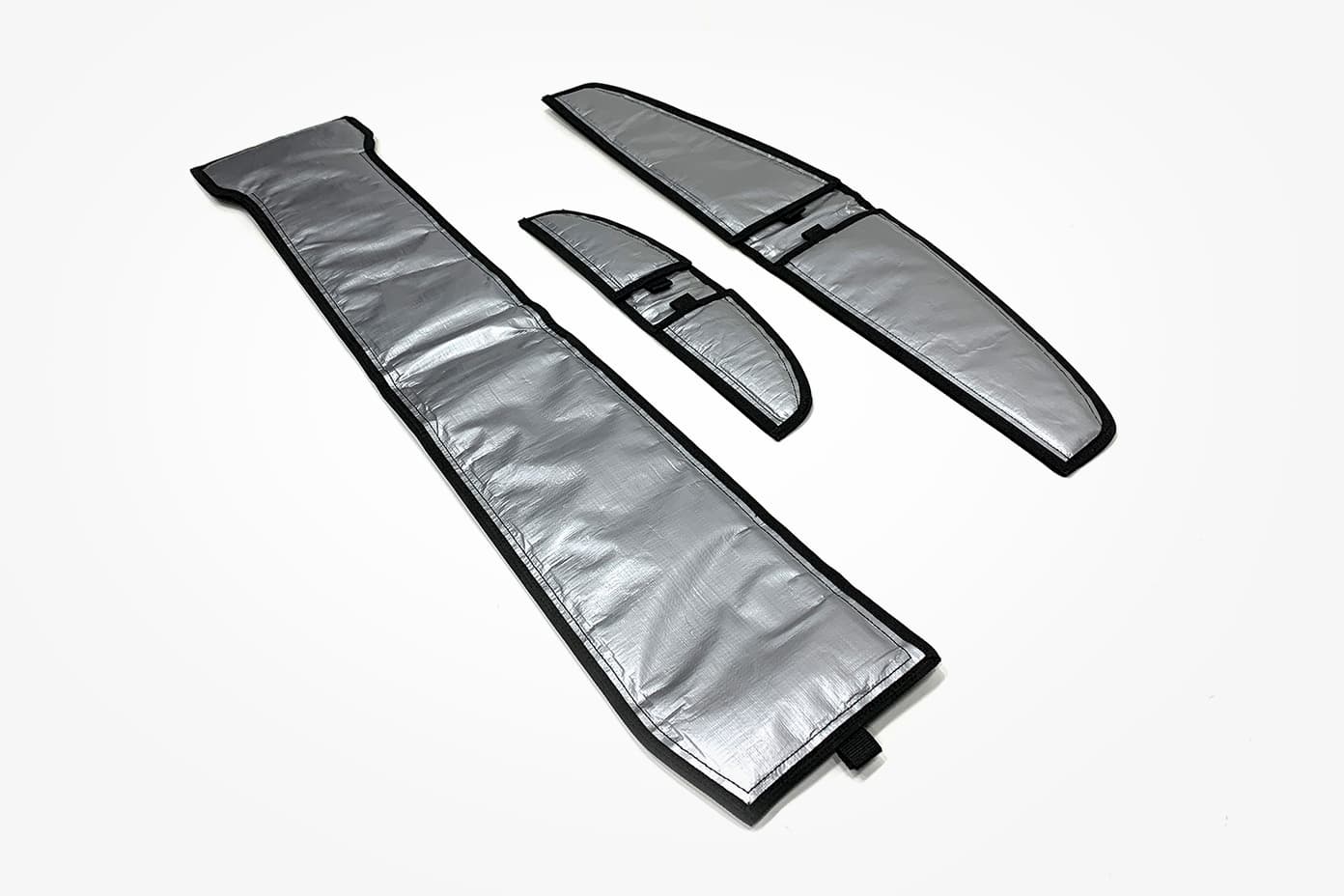 In 2017, Starboard Foils introduced the Racing Foil Geometry. With its long fuselage and forward wing placement, the racing foil geometry allowed foilers to outperform classic windsurfing for the first time.

The invention of the racing foil geometry was the breakthrough that led to two back-to-back World Titles and enabled the adoption of foiling in the Windsurfing Olympics. With iQFoil starts an exciting new chapter in windsurfing history.

The Freeride 1100 has a lower aspect-ratio and more sweep than the racing wings. So it offers loads of lift, it can keep flying at lower speeds and loves to foil jibe while remaining plenty fast. It’s a nice wing to boost early-take off but ultimately it doesn’t have the top-end speed needed for racing.

The Millennium 1000 and 900 are highly recommended to compete in lighter winds.

The Wave 1700 for SuperCruiser is not suitable and does not fit on the 115 Plus fuselage anyway.

The Freeride 500 is a large tail wing that makes foiling easier and more stable, and makes foil jibes easier to master, particularly through the sail-flip and feet-switch transitions. It is too large for the 115 Plus fuselage and not recommended.

The 330 is interesting for those looking for more power and earlier take off. It also opens the possibility of running a lower tail wing angle. Overall, our racers have continued to prefer running a 255-size tail wing.

The 255 -2° allows riders to reduce tail wing angle further. Combining it with the -2° spacer for example, gives you a total of -4°. Recommended especially if you also upgrade the fuselage to the 115 Plus Plus.

The 95 Plus is recommended for foiling on a reach, broad downwind and slightly upwind with speed. It is ideal for recreational fast foiling and setting your personal best top speeds. The shorter length makes the foil faster and increases pitch sensitivity: it feels less stable but this sensitivity is what gives you the ability to control sudden lifts from spurts of acceleration, avoid foiling out and keep pushing into the red zone in the hunt for more speed.

Spacers – what are they?

Spacers are plastic parts that fit between the various foil parts. Tail wing spacers and Deep Tuttle spacers also allow you to adjust certain angles while mast/fuselage spacers also help to prevent corrosive reaction between the carbon mast and the aluminium fuselage.